In light of recent events I endured online this month, I’ve decided to take a complete hiatus from the internet.  This means that there will be no new blog posts for the foreseeable future.  I will be back sometime, I assure you, but as to when, I can’t say.

My apologies to those of you who actually look forward to my blog posts, but I just need to take some time, unplug, and mend from the needless turmoil I’ve encountered online.

Along the Sunrise Trail in eastern Maine that I often bike in the summer/fall months, there are several sections that are marked for caution as they’re sensitive turtle nesting habitats.

Most of the rides I went on last year, I didn’t see a single turtle until fall. September to be exact.   On one such bike ride, I stopped on a little bridge to take a drink of water and I just happened to look down and see a little baby turtle, just one, all by its lonesome, climbing a rock in the little brook running under the bridge.

Now, earlier on the bike ride I’d seen another baby turtle, but sadly it had been run over by a 4-wheeler [-_-,], so I was so happy to see this little one alive and kicking that, I’ll freely admit, I squealed a little.

You have no idea how badly I wanted to scoop it up, take it home, and name it Donatello, but I know better than to mess with wildlife like that. It did make my day to see it and take a few pictures though!

I’ve heard and read that it’s easy to tell the difference between a turtle and a tortoise but for the life of me, I can’t remember what characteristics you’re supposed to look for in order to tell.

So, that being said, I’m not sure if this guy (or gal) I saw while on a bike ride this past fall is a turtle or a tortoise. I’m going with my gut here and guessing turtle. If I’m wrong, someone please correct me and re-educate me on the differences between the two. I do seem to remember that the shape and size of the shell was one way to tell them apart but again, I don’t know what characteristics belong to which. Either way, this was a surprise to encounter on the trail and I was sure to keep my distance in case it was a snapper or…you know…a ninja. [-_^] 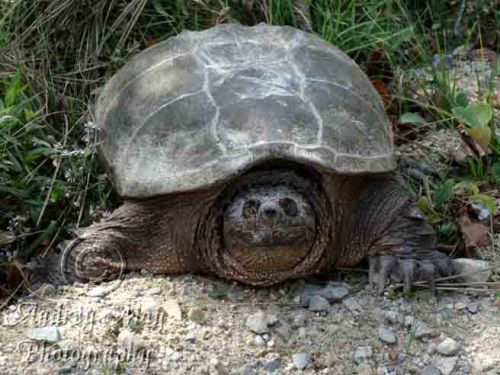 Anyway, this dude (or dudette as I didn’t go poking around looking to see what gender it was. That would have been awkward for everyone involved!), was just cruising along down the Sunrise Trail in eastern Maine, heading from one small boggy body of water, to another. I don’t know how far it traveled before I happened upon it but by the time it headed into the grass toward the water, it traveled a good mile from where I first encountered it. I even took a little video of it cruising along. For an animal that’s known to be slow, this little dude was just trucking!

I just thought I’d share this now because I was looking back through my photo archive from 2017 and realized I hadn’t shared any shots of this dude before. I can hear your gasps of shock and indignation. I also have shots from another bike ride of a baby turtle (yeah, I’m going with turtle), but I’ll share one from that group later. Maybe for my next post.

It’s officially the first day of 2018. Happy New Year everyone!

So, the past week hasn’t been very kind in terms of weather in my little corner of Maine. For a few days around Christmas it snowed, and when it stopped snowing, it was so cold it was pretty much impossible to enjoy the outdoors without being bundled up in so many layers you couldn‘t even move. So, I’ve basically been stuck inside.

For that reason, I have no pretty nature photos to share with you folks on this first day of the new year. Instead, I’ll share a shot I took a while ago of one of my cats being cute. Her cuteness is nothing new around here. In this shot, she was investigating an open bin that was left in the living room. As everyone with cats knows, whenever you move something or bring something new into the house, the cat(s) must investigate. 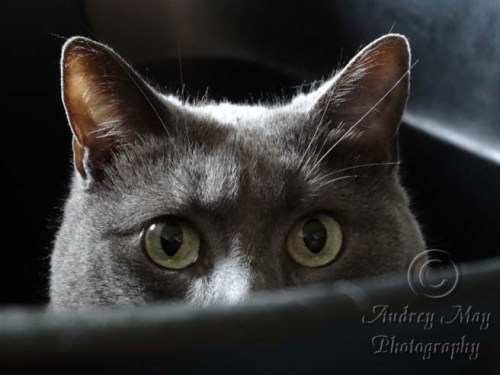 I’m sure most of my readers will actually be reading this on Tuesday instead of Monday this week as Monday is Christmas day, but that’s ok!  Better late than never!

To that end, Merry Christmas everyone!  And Happy Holidays to those of you who don’t celebrate Christmas!

Here’s a shot I took earlier in the year (when we actually had snow) to get everyone in the winter mood.  Funny thing about this shot, the sky was only overcast when I set out on the hike but on the way back it was almost a blizzard.  I couldn’t see more than ten feet in front of me at times.  That’s Maine for you.  Our saying about the weather is so true:  “If you don’t like the weather in Maine…Wait five minutes.”

Well, this marks my last post of 2017.  I hope everyone enjoyed my random musings and photos this year.  I’ll be back with a new post next Monday where it’s January 1st, then I’ll continue with my “every-other-week” posting schedule.

I hope everyone has a happy and safe New Year (and if you plan to ring in the new year at a party with alcohol, please drink responsibly and designate a driver)!